The Dutch City of Delft is a beautiful city. And I am not saying that because I am Dutch, or because it is so close to Rotterdam, where I live myself. Just take a stroll through Delft using Google Streetview if you don’t believe me.

Delft has a historic center with canals and was founded in the Middle Ages, getting it’s charter as a city in the 13th century. There are many buildings dating back to the 15th and 16th century. Delft is famous for it’s blue ceramic. It currently has a population of around 100,000 and millions of visitors.

Cities are getting more crowded. More people, means more vehicles and it is that part that the City of Delft is trying to do something about. Next to the fact that historic cities tend to have narrow streets, that get easily clogged, exhaust fumes have a deteriorating effect on the buildings. Delft is trying to fight both and is doing that together with Dutch Post and Parel company PostNL.

Right on the Delft exit of the Highway they have opened up a distribution center from which they will deliver goods into the City with small electric vehicles. Between the hours of 7h00 am and 8h00 pm the electric trucks make trips into the city every two hours to deliver or collect shipments. For citizens and visitors it means less traffic jams (less trucks in the city). For tourists it means an unobstructed view of the beautiful historic centers (less trucks in the city). Combine that with increased safety due to less traffic and cleaner air, and I’d say this is a pretty good deal. The new service has been named Stadslogistiek Delft (City Logistics Delft).

The idea itself is not new and has been tried before, but I have not seen this particular setup before. The vehicles are all electric (also not a novelty), which couldn’t be done in the past due to insufficient battery capacity and effective range of the vehicles. The novelty is that it aims to serve all types of receivers and shippers in a city

And of course they will develop an app that will allow for placing orders and tracking shipments. Well you can hardly do anything these days without an app. I wonder if it will send YO’s! as well. 🙂

I’m curious to see if this concept will be successful. Based on the setup and the variety of services and options, I would say: Yes, it will be! Time will tell… 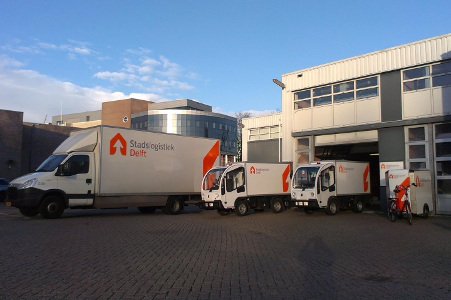