Tidetech to present ‘Beyond Weather Routing’ at Green Shiptech China

Tidetech will present ‘Beyond Weather Routing: the role of next generation oceanographic data’, at the second annual Green Shiptech China Congress (GSCC), 18-19 April 2013.

The presentation will highlight the role of integrated, high-resolution oceanographic data in improving vessel efficiency and reducing bunkerage through route and speed optimisation. It will also focus applications in performance monitoring, improved ocean current forecasts, and new regional data models for Singapore/Malacca Straits, the China Sea and other Asian shipping routes.

Tidetech managing director Penny Haire said oceanographic data for shipping efficiency was a new and low-capital approach to reducing bunkerage and emissions that could be applied immediately to new and existing ships.

“Route and speed optimisation using tide and current data goes beyond weather routing in that it results in additional bunkerage savings and efficiencies that are unrelated to weather,” Ms Haire said.

“A key point of difference is oceanographic data can be applied to deep ocean and coastal routing, as well as restricted navigation channels, whereas weather routing is a deep ocean, or Pilot-to-Pilot, service… both options add benefits to efficiency in different areas.

In a trial with a major cruise line earlier in 2012, bunker savings of one to four per cent were shown on routes using the Gulf Stream currents between Florida and Mexico.

Further analysis has revealed that applying speed optimisation can create significant single-trip savings when optimising vessel speed through restricted navigation channels such as the English Channel and the Malacca Straits. Video analysis can be viewed here: http://www.youtube.com/watch?v=7xWAHTgDxQw

Tidetech is currently running ship efficiency trials aboard a cruise ship in Asia and on container vessels worldwide. Results are expected in early 2013.

Tidetech will also be presenting and exhibiting at the Green Ship Technology 2013 conference in Hamburg, 12-14 March. 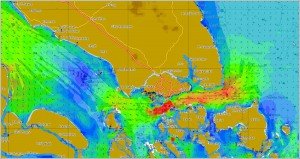 Giant Plane vs. Giant Ship – How to Get Your Cargo Across?