If you go outside (especially when in a city) and you look around, you will without a doubt see somebody looking at the screen of their mobile. Maybe they are texting or looking up a number (how old school), but chances are high that they are busy browsing the web, doing their e-mail, updating their Facebook or tweeting.

Smartphones are everywhere and companies tend to go to where the people are, so a lot of them went smart (read: mobile) as well.  There are several ways to go about this. 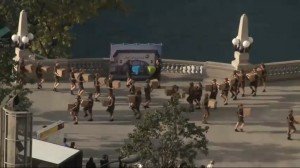 “We’re always looking for ways to make Con-way Multimodal easier for carriers to work with and through Twitter and Con-way TweetLoad, we have found an innovative channel to continue in that direction,” said Tyler Ellison, president, Con-way Multimodal. “Twitter is where the carriers are, and Con-way TweetLoad enables us to reach them by pushing shipment information directly and automatically to any carrier who wants it, even on mobile devices.” 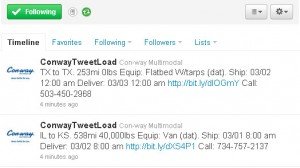 As TQL Carrier Project Manager Eric Olson tells LogisticsMatter: “The idea was a response to the needs of the carriers and where we saw the industry heading. More and more transportation companies are offering driver management, TMS, or customer-oriented apps, and we received a great deal of feedback from our carrier base asking us to help make it easier for them to do business away from a traditional office. We felt that with the capabilities of today’s smart phones we could come up with a way, and that developed into Freight Finder.

Freight Finder was a collaboration between our IT department, marketing department, and carrier facing departments. It’s one of the most exciting projects we’ve worked on in a long time…. It’s a credit to our IT and Marketing departments that they were able to so quickly shift from more traditional projects into something as modern and different as Freight Finder. We also had some of our carriers test it out and they provided extremely valuable insight that we were able to incorporate before releasing the finished product to make it more useful.”

Smartphones are getting smarter every day. Mobile internet connections and processors are getting faster, screen resolutions and graphics are getting better, Near Field Communication (NFC) capabilities are being added, and even 3D is coming to your phone. These are exciting developments that can lead to very interesting applications in Logistics and Supply Chain.

What applications are you using on your smartphone, that enhance your Logistics and/or Supply Chain operation? And what developments do you see that will lead to new mobile applications?