Container Shipping Rates Continues to Fall in June, but Will They Rise in July?

Oslo, Norway (June 27, 2013) — The market index for Asia to North-Europe is still on the decline, the average for a 20ft saw a 19% drop since 26th of May compared to the 26th of June reports Xeneta (www.xeneta.com), the price comparison service for sea freight. The market average for a 40ft in Asia to North-Europe performed similar with a 20% decline in container shipping rates in the same period.

The rate pressure is higher than ever with the announced general rate increase on July 1, where ocean carriers are attempting to push GRI’s up to $1000 per 20ft container – the highest increase ever. The rates are expected to rise from today’s levels, as the average prices for trade lanes like Shanghai to Rotterdam is as low as $877 per 20ft and $1,488 per 40ft, last tracked on the 26th of June. Compared to May, that’s a 13% decrease on 40ft and 10% decrease on 20ft.

“We saw in March after the GRI was released that the prices held steadily for a couple of weeks, but dropped significantly in the beginning of April. So it’s pure guesswork to say how long prices will hold with ocean rates being as volatile as they are,” says COO of Xeneta, Thomas Sørbø. “The lowest rate we’ve seen per today is less than $500 on Qingdao to Le Havre for a 20ft container.”

Xeneta’s market index also reports that the average rate for a 40ft container, on several other key trade lanes like Shanghai to Felixstowe, was at $1,500 and Tianjin to Antwerpen was at $1,583. These two trade lanes are just a small part of the growth Xeneta has seen with its 2300 port pairs and it continues to grow as more shippers and suppliers take part. 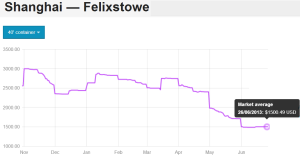 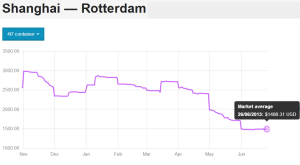 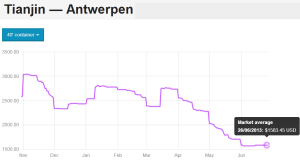 Head of Marketing and Communications

Founded in 2012, Xeneta (www.xeneta.com) brings transparency to the shipping industry. Xeneta’s simple but powerful reporting tools allow freight buyers and sellers to benchmark their prices against the market average and best performing rates. Xeneta is a privately held company and is headquartered in Oslo, Norway, founded by Patrik Berglund, Thomas Sørbø & Vilhelm Vardøy.

The Power of IoT to Get Better Visibility Over Shipments
Manage Cookie Consent
We use cookies to optimize our website and our service.
Manage options Manage services Manage vendors Read more about these purposes
Preferences
{title} {title} {title}