Mars are back for 2012 and ready to retain their Fresh Connection UK Supply Chain Champion title.

Adam Lockwood, Supply Chain Development Manager for Mars Chocolate stated: “The Mars team are extremely confident going into 2012 SCALA’s Fresh Connection, we’re hoping to retain our winning title. The competition is a lot bigger and diverse then before, but our team aspire to reach the Global Finals again.”

Mars topped the rankings in the 2011 UK Fresh Connection Grand Final, and were also crowned runners-up of the International Finals in Pisa, with the Dutch team from Bavaria Brewery taking first prize. This year they will be up against some of their old opponents as well as new entrants to the competition, such as Cadbury, Unilever, La Palette Rouge and General Mills.

Adam Lockwood: “It was a challenging test of decision making, commercial awareness and learning agility that requires each individual to understand the impact of their role and actions on the profitability of the whole business.”

This year’s competition, supported by The Chartered Institute of Logistics and Transport, will again be run online and – new for 2012 – at a series of challenging two-day events at venues across the UK.

The launch of SCALA’s Fresh Connection 2012 will take place at Foodex, the UK show for processing, packaging and logistics, which takes place at the NEC on 25-27 March. Exhibitors will be able to get a flavour of the intense atmosphere as the nation’s top organisations battle it out in the UK’s biggest supply chain and logistics competition.

Does your company have what it takes to knock the confectionary champion from its podium?

Find out more at www.thefreshconnection.co.uk 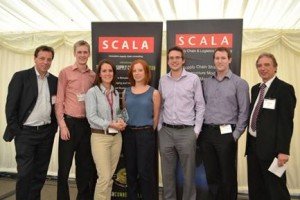 Logistics in the News – Week 11

The Best Supply Chain and Logistics Blogs on the Web

Boeing Just Patented an Aircraft That Picks up and Carries Regular Containers
Manage Cookie Consent
We use cookies to optimize our website and our service.
Manage options Manage services Manage vendors Read more about these purposes
Preferences
{title} {title} {title}