Schindellegi / CH April 16, 2012 – Despite further volume growth, cost increases, lower margins in the forwarding business and an antitrust fine of CHF 65 million imposed by the European Commission led to unsatisfactory results for the first quarter 2012. 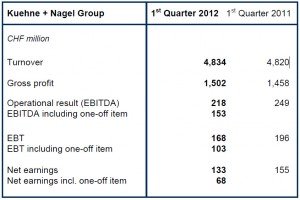 “In the first quarter of 2012 we had to cope with a number of adverse factors,” said Reinhard Lange, CEO of Kuehne + Nagel International AG.

“Our investments in growth initiatives resulted in considerable cost increases. We will counteract this trend with strict cost control and measures to improve productivity. Furthermore, profit margins declined in sea and airfreight. In addition, there are one-off charges due to a high antitrust fine, which was reported on March 28, 2012. Nevertheless, we achieved growth above market average.”

In seafreight, Kuehne + Nagel increased container volume by 9 per cent while – according to first estimates – the global container market grew between 3 and 4 per cent. In line with its strategic goals, Kuehne + Nagel increased growth in the transatlantic and transpacific trades. As a result of margin pressure, influenced by significant rate increases in several trade lanes, and high investments in IT and sales, EBITDA-to-gross profit margin declined from 35.9 per cent to 30.3 per cent. The operational result decreased by 15.2 per cent compared to the previous year’s period.

The international airfreight market experienced a significant volume decline in the first three months of 2012, resulting in a contraction of 3 per cent after an encouraging volume development in the same period of 2011. Kuehne + Nagel raised tonnage by 4 per cent. Beside  he ongoing positive demand in South America, the intra-Asia business developed well and volumes increased in the trades from Asia-Pacific to the Middle East, partly due to the acquisition of an Australian company specialised in Perishables Logistics.

Investments in growth initiatives and IT resulted in a decline of the EBITDA to gross profit margin from 32.3 per cent to 26.5 per cent. At CHF 54 million, EBITDA was 14.3 per cent below the previous year. Due to the inclusion of the one-off item for the antitrust fine a loss of CHF 11 million was recorded.

Good progress was made in the European overland business. Freight volumes increased in the segments groupage and full and part loads despite the difficult economic situation in Southern Europe. The British RH Freight Group, member of the Kuehne + Nagel Group since 2011, considerably contributed to the overall improvement of net turnover by 18 per cent in local currencies. EBITDA increased by 7.7 per cent; at 1.9 per cent the EBITDA margin remained stable at the previous year’s level.

The contract logistics business saw divergent regional developments in the first quarter of 2012. Strong demand in Central Europe, Asia and South America resulted in an increase of net turnover by 6 per cent (currency adjusted). In contrast, high margin pressure and volume declines especially in France and Southern Europe led to a decrease of the business unit’s operational result by 19.5 per cent. EBITDA margin was at 3.1 per cent (previous year: 3.9 per cent).

Reinhard Lange: “As a consequence of the experiences made in the first quarter of 2012, we have intensified our cost management. We are confident that the measures implemented as well as solid growth will contribute to an improvement of results in the second half of the year.”

With over 63,000 employees at more than 1000 locations in over 100 countries, the Kuehne + Nagel Group is one of the world’s leading logistics companies. Its strong market position lies in the seafreight,  airfreight, contract logistics and overland businesses, with a clear focus on providing IT-based integrated logistics solutions.

Further information can be found at www.kuehne-nagel.com

Know Your Trucks (and Tank trailers) – An Infographic

How Fleet Managers Can Save Money
Manage Cookie Consent
We use cookies to optimize our website and our service.
Manage options Manage services Manage vendors Read more about these purposes
Preferences
{title} {title} {title}